My girlfriend recently got a Yotta savings account which has an interesting twist: instead of paying interest like a normal bank, they buy you lottery tickets. This makes saving more exciting, since you have a small chance of winning millions of dollars.

Now, my first thought was that this must be a terrible deal for whoever’s playing, since the lottery is generally considered a bad investment. But it turns out the Yotta lottery actually has pretty good odds. People have calculated the average return to be around 2.6% APY1, which is not a bad return for a savings account. This will likely decrease as they become more established and get more users.

What is the variance of Yotta interest?

One question I haven’t seen answered on the internet is about the variance of the APY. Sure, maybe the average investor gets 2.6% APY. But that might mean most people get 0% and one person wins a few million dollars. If I’m going to invest, I’d like some guarantees on the lower-bound of the amount of money I’m going to get back.

This is a really straight-forward instance of the law of large numbers: the more tickets you buy, the closer you’ll get to the average return. But before we break out the math, let’s start with some simulations to get some intuition of what to expect.

Let’s suppose 10k people each invest $10k in a Yotta savings account. How much interest will each of them earn? We can simulate this scenario with a pretty simple python script:

The results are plotted in the histogram below. On the x-axis is an amount of money, and the y-axis shows how many people won that much money via lottery tickets. 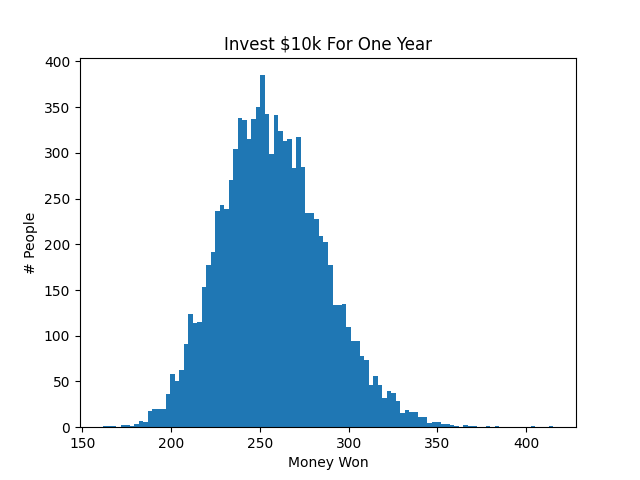 So the variance isn’t that bad. Of course, if you invest less money you get less tickets, and so the variance will increase. Below is the same experiment when people invest $1k each. 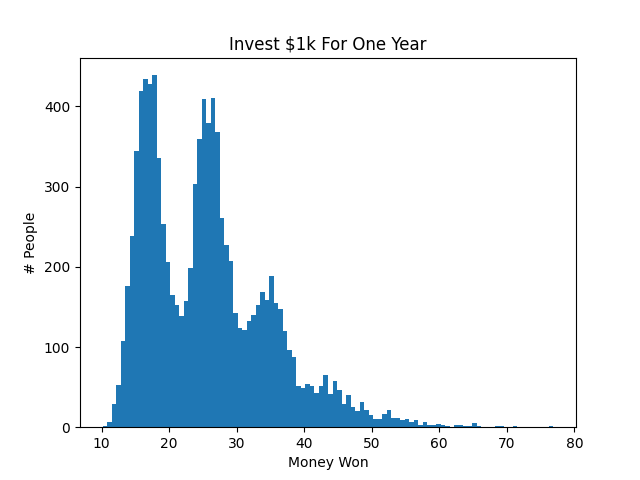 In this case, the average still seems to be around 2.6% APY. However, some people get back as little as 1.0% APY, and there’s a large skew right, with some people getting as much as 6.0% APY. If you’re interested in running more experiments, I’ve provided the python snippet below. (If that’s broken you can also grab the code on github.)

I mentioned earlier that buying many lottery tickets is a very straight-forward instance of the law of large numbers: the more tickets you buy, the closer your winnings get to the expected APY. But what if I want to quantify exactly how far my earnings will be from the average? For example, if I invest $10k for one year, how likely is it that I earn less than $200?

This is exactly the question that tail inequalities answer. Suppose I have a random variable \(X\). Tail inequalities tell us how probable it is that \(X < t\), for some value of \(t\). There are several types of tail-inequalities you can use, depending on how much information you have about \(X\):

Let’s break this down for our case:

So Chebyshev guarantees that we’ll make more than $200 with at least 75% certainty. But remember, that’s just a bound. Based on our simulations, the probability that we make more than $200 is likely much higher than 75%. I would probably say it’s around 95% based on the histogram.

If we can verify that the distribution is approximately normal, as we have above with the $10k scenario, we can skip calculating the Chebyshev or Chernoff bounds and just assume the distribution is normal. Plugging in the average and standard deviation into this normal distribution calculator tells us the probability of making more than $200 is 98%. This is much more in line with the results of our experiments, if slightly more hand-wavy.

You have to be careful with this approach, however, since not all distributions will be normal. For example, the second scenario we tested, where each person invested $1k, showed that the distribution wasn’t very close to a normal distribution. In that case, it might be better to apply Chernoff or Chebyshev bounds.