This post is about a very small piece of the transfer learning puzzle. I’ve noticed that when doing transfer learning in a few different circumstances, the pre-training loss/accuracy almost linearly predicts the downstream loss/accuracy. I don’t have a good explanation for it, but it suggests something “simple” is going on that we might exploit to further improve the pre-training paradigm. Here are a few examples.

The first time I encountered this was when I was experimenting with pruning BERT.4 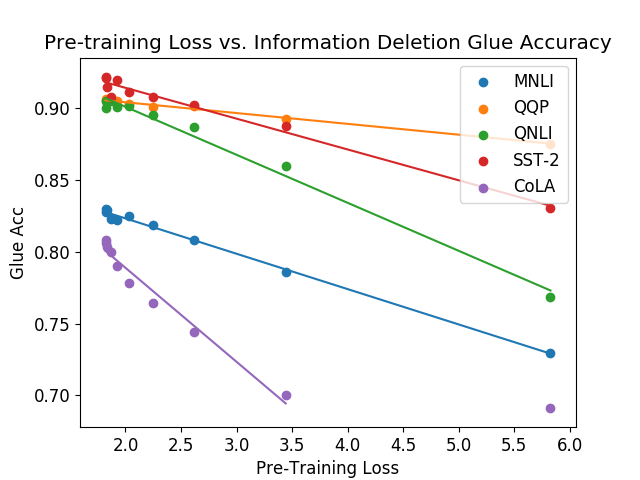 Each dot represents a version of BERT which has had some percentage of its weights deleted, forcing it to perform worse on the “masked language modeling” task. The pre-training loss achieved by each model is plotted on the x-axis, and the performance of each model on various GLUE tasks5 is plotted on the y-axis. I was surprised by how linear the relationship was. 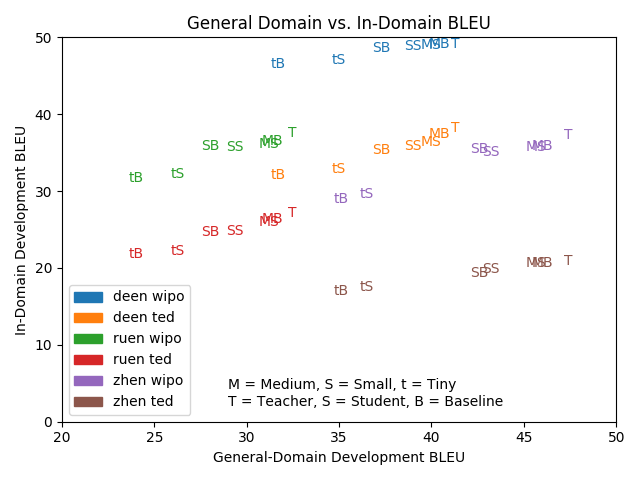 Finally, when I mentioned this trend to Jared Kaplan, he said he’d also seen it in his work. 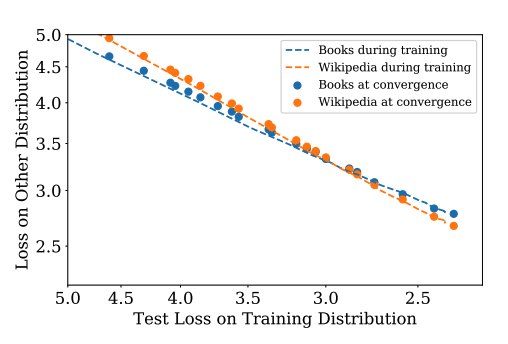 Is this phenomenon robust?

It seems like this trend is pretty common, but obviously it has to depend at least somewhat on the training details, such as hyper-parameter selection. I’d like to know if and when this trend breaks down for certain tasks or models.

I’d also like to see some examples of negative slopes, such as the negative transfer documented in BERT on STILTS.1

Can we predict the slope?

A linear relationship seems to imply something “simple” is going on under the hood. But what is it? Do we understand this relationship well enough to predict when pre-training on one task will improve performance on a second task? Here’s a couple conjectures.

Dataset Size The simplest explanation is that the slope of the line is entirely predicted by how much data is present in the pre-training and the downstream datasets. However, recent empirical results makes me think dataset size is not a good predictor of task compatibility.9

Skills Instead, perhaps each task requires a certain set of “skills,” which are present in varying proportions in each dataset/task pair. A naive set of skills might be the set of tasks used for linguistic probing, although I suspect it’s much more complicated than that.10

This idea is supported by the fact that some kinds of pre-training hurt downstream performance if the tasks don’t align well.11 9 BART2 and MARGE3 also show that changing your pre-training objective to look more like your downstream task can help, supposedly because the “skills” required to do the new objective are more similar to the skills required to do the task.12 The MT and LM examples above also seem to indicate training on the same task with different data distributions usually helps.

Can we manipulate the slope?

Which tasks have the worst slopes?

A task with a very flat slope would imply that it won’t be “solved” by pre-training unless we follow the scaling curves impractically far to the right. What kind of task is that? Can we get better pre-training data for it?

When are two tasks compatible?

I think at the end of the day, the question in all of these domains (LM pre-training, MT domain adaptation, multi-lingual training, etc.) boils down to one simple question: when does training on Task A improve performance on Task B? It would be nice to have a framework for thinking about this. If anyone is aware of one, please let me know.