In the machine learning research community, achieving state-of-the-art usually means reporting a single score (percentage accuracy or F1) on a public research dataset. There are two legitimate reasons to report a “SOTA score” in a research paper, besides gaming the system.1

However, a SOTA score in today’s context accomplishes neither of those goals. Because of the way many benchmark datasets are constructed, a high test score (even surpassing human performance) is unlikely to mean that the model is ready for real-world deployment or that the task is “solved.” Furthermore, the ability of neural methods to predictably improve performance with scale means that a single SOTA score is not enough information to decide whether one neural method is better than another.

Underspecification: The Task Is Not Solved

In the early days of machine learning, task performance was often associated with accuracy on a single dataset. “Solving” hand-written digit recognition meant achieving a high accuracy on MNIST, and the Penn Treebank was the gold standard for part-of-speech tagging in natural language processing. However, as the field matured we began meeting the goals we set for ourselves, and we quickly understood that solving the task is not the same as solving the benchmark.

I first experienced this when BERT broke the General Language Understanding Benchmark2, well surpassing human-level performance. Many linguists appropriately asked: does this mean we’ve solved language understanding? The answer was a resounding no. Many papers since have been dedicated to all the ways BERT can be wrong or, worse, right for the wrong reasons.3 4 Many papers pointed out that BERT (as well as later models) can rely on spurious correlations in the data and demonstrated that small, meaningless input pertubations could lead to incorrect answers.5 This is analogous to adversarial examples in image recognition, where adding a small amount of noise can change a correct label to an incorrect label.6

Evaluation datasets are often not powerful enough to differentiate between a model which generalizes and a model which relies on spurious correlations. They may also lack sufficient coverage, such that a high test score obscures problems with the model that would cause problems in production, such as racial/gender bias7 or susceptibility to attack.8 In a recent paper, Google researchers called this problem “underspecification,”9 and point out several examples across the company in which models achieve similar test scores but exhibit widely divergent behaviors when deployed in production. They show that this is a distinct problem from domain-shift, in which the test data distribution is different from the training distribution.

One fix for the problem of underspecification is just to “make the dataset better.” Some interesting work in this direction:

Inspired by “unit tests” in traditional software engineering, Checklist is a framework for testing NLP models along many directions of “linguistic proficiency” by augmenting test examples with deterministic transformations. Examples include negating verbs and replacing nouns in sentences with novel nouns.

A suite of NLP datasets from the Allen Institute for AI. Some datasets are constructed to target specific language capabilities. For example, DROP involves performing discrete reasoning (adding, sorting, counting) over many paragraphs of text.

“Tail-chasing” is an attempt at making models more robust to items in the long-tail of the dataset, such as rare words or images. Some other work in this direction:

Neural Scaling: Which Method Is “Best”?

Which neural architecture achieves SOTA on a task depends entirely on the amount of data and compute provided to the architecture. As shown above, performance scales like a power law with data, compute, and parameters. This has now been demonstrated for many data domains, modalities, and neural architectures.10

This means you can make any neural architecture SOTA if you’re willing to spend enough money pouring resources into it. A single SOTA score is not expressive enough to capture this behavior. Consider the following graph showing the performance of machine translation methods with varying amounts of data:11 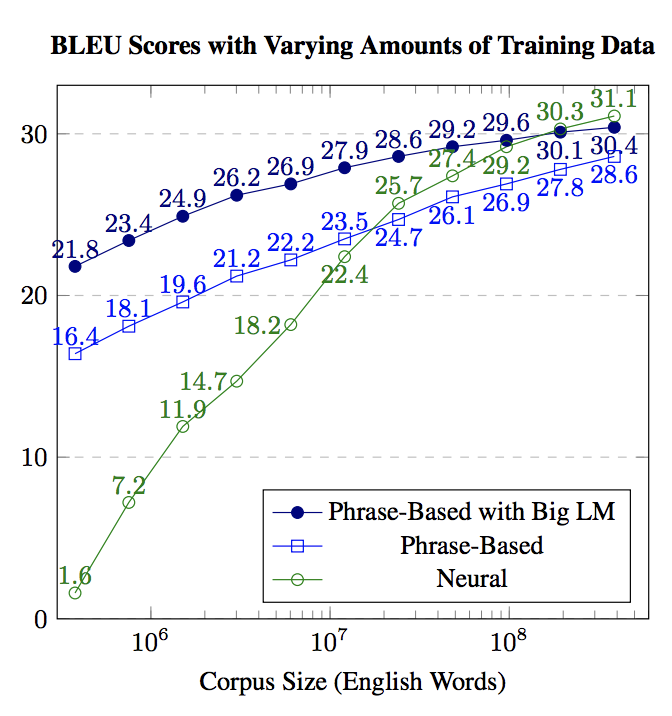 Purely neural methods out-perform other methods when given enough data. However, in low-resource regimes, they fail miserably compared to phrase-based approaches. Depending on how big our training dataset is, a SOTA score might lead us to dramatically different conclusions. A small dataset might give us the impression that phrase-based methods are “better”, whereas a large dataset would lead us to believe neural methods are “better.”

The reality is more nuanced: phrase-based methods have inductive biases that make them better in low-resource scenarios, whereas neural methods scale better with data. And this simple situation doesn’t even take into account the amount of money spent on compute while training each method, and whether that was a bottleneck for either method.

This implies that beating a benchmark dataset is no longer newsworthy (i.e. worthy of publication). Anyone can get a SOTA score if they invest enough money in procuring the data / compute required to get there. What is newsworthy is if you improve the money-to-performance trade-off. That could save billions of parameters or millions of dollars!

In other words, because of neural scaling laws, nearly everyone in ML is working on machine learning efficiency at this point (either compute efficiency or sample efficiency), but no one is measuring success that way!! That’s why ML reviewing feels so broken lately. Here’s a few things we could do right now:

A lot of people complain ML reviewing is broken. I tend to agree. But I also believe that it’s possible to get our act together, as long as we all agree on a paradigm for evaluating new approaches. I think scaling laws, accompanied by robust and strengthened evaluation methods, can help fill that role.